Blake Shelton has released yet another new song from his new album Texoma Shore. Following the release of "At The House" and "I Lived It" earlier this week, and lead single "I'll Name The Dogs" back in September, the country star has shared a track called "Turnin' Me On." And iHeartRadio has teamed up with Nissan to bring fans an exclusive acoustic fireside performance of the song at his ranch in Tishomingo, Oklahoma.

Bobby Bones joined Blake at his ranch after pulling his mobile radio studio with a Nissan Titan, and the country star opened up about writing the song, and revealed he was thinking of someone extra special (wink wink) while he was writing it.

Blake explained of the writing process and inspiration for his new song "Turnin' Me On':

"We were playing in Louisiana. I got to the gig, and I was sitting on the bus, and all of a sudden, I started playing this little lick on the guitar, and I came up with this chorus, 'Turnin' Me On.' And I thought it was good enough, that it scared me. So I stopped working on the song, and I texted Jessi Alexander, and I said hey, I need your help, I think I got something here that's pretty cool and I'm gonna screw it up. And she and Josh Osborne helped ... basically, they wrote the song. I just had the chorus, but they wrote the song, and they even ended up making the chorus a little bit better. But, I just thought it was a cool song."

He added of the song's inspiration, "I was literally thinking of my girlfriend when I wrote this thing. I don't write that many very personal songs, but this one, I think, hits the mark."

Fans can also win their own Nissan Titan XD Crew Cab Diesel in Deep Blue Pearl, featured in Blake Shelton's All-Access Pass Series. Enter by clicking HERE or on the image below. 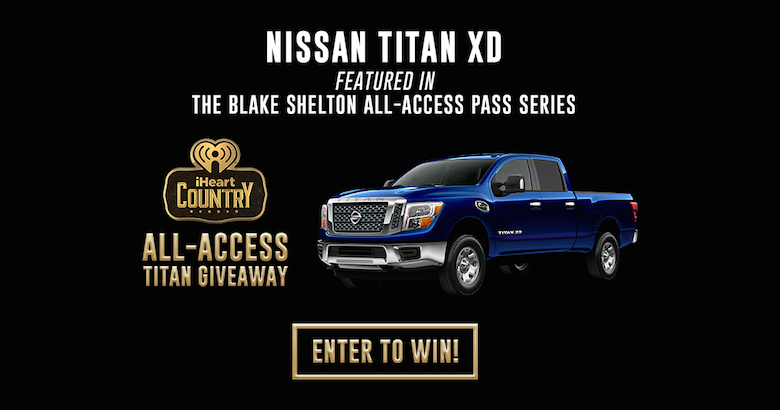