TODD: So it's back. They can't stop talking about Colin Kaepernick. Tim Tebow got a second NFL tryout, and people of course went... I love this word so much. I love saying "apoplectic." I don't know if I say it correctly. Apoplectic? They went nuts. (laughing) I have confirmation from the broadcast engineer, Mike Maimone, that I've said "apoplectic" the right way. 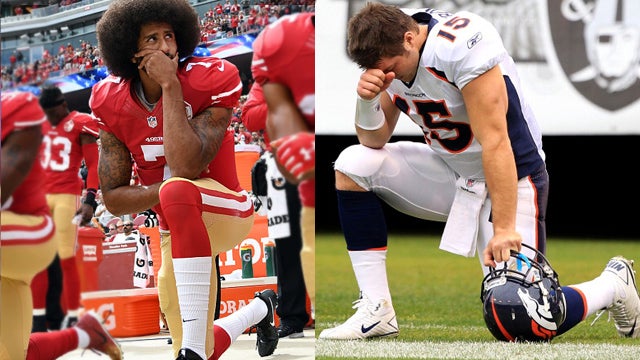 And both of them have lovely white parents and grew up in a position perhaps of at least comfort to privilege economically, to speak in the nomenclature of the left. I want to say this thing to Kaepernick. They're not speaking. Taking a knee is not speech. I can put on you whatever I want to put on you. It turned out I was right. You don't like America.

You didn't vote. Maybe you do now. You're not a person who's deeply educated about these things, by choice, inning. And when you wear socks that say, "All cops are pigs," well, that's also speech. But taking a knee is not speech. It's a demonstration. Tim Tebow took a knee but for other reasons.

I mean, think of this. You got two guys who wanted to be NFL greats, two guys who didn't quite make it that level. Sure, one got closer to greatness on the field, and one of those guys took a knee in prayer, and the media hated him for it. And the other guy wore those "all cops are pigs" socks. He took a knee during the national anthem, and the media loved him for it. Rush compares Tim Tebow and Colin Kaepernick the way only the Maha could.

They think he's being blackballed because of his politics. He may be -- and if he is, the people blackballing him have every right to do so. What do you think the First Amendment's free speech clause grants you? The right to say what you want politically? You're right. It does. Now, the First Amendment says that government cannot stop you from saying what you want. It doesn't say the San Francisco 49ers can't. If you work someplace, your First Amendment rights do fall under the policies of your owner or of your boss or of your workplace.

This is not a fine point. But larger point is this: The media is trying to portray Kaepernick as a hero for courageously and with great guts criticizing his own country and criticizing the bias and the prejudice and the murderous police. It takes guts and courage. Now, there's every entitlement to do it. Kaepernick, anybody else has every right to say what they want to say about that. But, two things are incumbent here. No one has the right to be heard -- and this I find... When I say this to people who think they understand the First Amendment, that shocks them.

How many people do you think believe that Kaepernick should be applauded for courage and not have to suffer consequences for what he said? How does that work? Everybody... You know, there's a price. There are consequences. There's gonna a reaction. Not everybody's gonna agree with everything that anybody else says. Kaepernick is not a victim. But they're trying to portray him as a victim. "He went out and he said courageous things; he had the courage to criticize his own country," and for that he should be made a hero? That's not how it works.

Nobody gets to... You don't get to go out and say provocative things and then be immune from criticism or consequences. Everybody is. And so that factors into what you're gonna do. If you're gonna go out and you're gonna say things that are gonna make it harder for the people who might hire you to do business, it makes perfect sense they wouldn't hire you. Now you add to that that these people may believe you're not any good anymore. But if Kaepernick isn't being hired because of what he said, that's perfectly normal.

Now, some of the responses, some of the circumstances are not fair, admittedly. But in a free and open society with the First Amendment guaranteeing political speech, there are consequences, and there are ramifications. The point is, the First Amendment does not grant anybody immunity from the consequences of what they say or from the reactions from people to what they say -- and Kaepernick is being held up as somebody who should be immune. "He should not be held accountable for what he said because we happen to agree with what he said," the media says. That's not how it works.

If you're a football coach and you believe your team needs discipline and focus if they're to have a chance, the last thing you want is a circus, for whatever reason. Talk to Tim Tebow! Tim is the exact opposite of Kaepernick. He loves America, is a born-again proselytizing Christian. Why do you think he's not in the league? A lot of people think, "Because there's anti-Christian bias, Mr. Limbaugh!" There may be, but there are also people that don't want to deal with the circus -- and, if they don't, that's a consequence. You know, it may seem unfair, because you make value judgments on what someone says.

Like you may value what Tebow is and what he says, and you might not think so much of Kaepernick and what he says or does. But in both instances, there are consequences for behavior and for reactions. You know, if you want to be on radio or TV? That's what Kaepernick ought to do. I think what he ought to do, Kaepernick ought to get a show on YouTube and go to town. He can say anything he wants; Google would celebrate it. (Google owns YouTube.) But Jim Brown said it. Jim Brown said (summarized), "Make up your mind what you want to do: You want to play football or you want to be an activist?"

TODD: There are happenings in Hollywood that are also very good news for us. It is. And we had a drive-by caller, Bernie from Syracuse, say that we are not the United States of America; we're the untied states of America. I think that's a really good way to say what has been done to America, 'cause it didn't "happen." None of it's organic. It's all purposeful.

The country's being divided by people who hate us, and they're obsessed with our destruction. He can pretend otherwise, and that's a fun game, but it's not gonna get us anywhere. The good news out of Hollywood is this, that the Golden Globes are canceled 2022 because Hollywood cannot be diverse enough to satisfy their masters.

So the reason it's good news is, when they start to see their work canceled --when they could no longer have their self-congratulatory award shows -- they may get fully rewoke as into reality. I mean, how many times did Rush discuss with us what the NFL and Hollywood are doing to themselves by chasing wokeism? If only they had, you know, some enduring principles by which to live.

RUSH: Anybody watch the college football championship game last night? Donald Trump walks on the field at the 40 yard line for the national championship game, national anthem, singing along, heart covered by his right hand, and, I mean, the place erupted in cheers. Now, the Drive-By Media is saying there were some boos. I haven't talked to anybody who heard any boos. Now, there had to be some of course, I mean, the place was filled and the law of averages is such. But the cheers and the support for Trump is overwhelming.

And, you know, ESPN's televising the thing, it had to just destroy them to see Trump show up and then to have this kind of reception and this kind of support that he got and for showing up in the national anthem and standing and putting his hand over his heart and singing along with it. And then you find out after the game last night that the college football ratings were through the roof.

Meanwhile, ratings for the NFL wild card weekend were down double-digit percentage-wise all four games Saturday and Sunday. And Trump in a little bit of a microcosm last night, the college football championship, illustrated exactly why. In addition to the college football ratings being way up where there are no kneelers, where there is no disrespect for the American flag or the country, the NFL playoff games double digital ratings decrease and the Golden Globes ratings were down from 2017. They fell to a six-year low.

Now, what do these two things have in common? The National Football League plummeting ratings throughout the season and the Golden Globes show, ratings down, a six-year low. What is the thread that runs through both of these? Yeah, yeah, yeah, the protest thing, but what's behind the protest thing? Liberalism is what the thread is. Liberalism is running through this, the left.

The forgotten people in flyover country do not want to see all of these wealthy millionaires lecturing them on how horrible they are and how horrible the country is. It doesn't compute. Your average, ordinary American watching Hollywood celebrities with their vast displays of wealth and power, you know, just entertain us and go home. Don't preach to us. What gives you the right to preach to us? They can try it, they can do it, but it isn't working, and the more they preach in actual movies and in their award shows, you see what is happening.

And what is being demonstrated here is that people are demonstrating, proving slowly that they can live without Hollywood awards shows.

And more and more people apparently can live without the National Football League. Now, what if that establishes as a habit? What if this establishes a new normal for people to begin tuning out these two entities that have become major institutions, dominant institutions in America.

And this I don't think is a one-year one-off. It's not something peculiar to 2017. This I think is a major trend. Look, if this were happening in your business, if you were losing audience like this, if you were losing customers like this, you would be deathly concerned. You'd be panicking. You'd be working on ways to reverse it. These people aren't. They are doubling down every time the American people show their displeasure by walking away from these events and not watching them. This is typical of the liberals, by the way.

TODD: And now their ego-fest is canceled for the year.