It's uncommon for most people to do it. It's impolite. Just one suggestion. Ask them to live by their rules. At school board meetings, ask them, or in a parent-teacher conference if you're with a white teacher and you're in a parent-teacher conference, say when are you -- when are you resigning so a person of color can have your job? They're not gonna have an answer for that. Or if they're teaching the pervasive and pornographic sex ed labeled comprehensive sex education underwritten, by the way, by Planned Parenthood -- I wonder why -- ask them questions from the curriculum. I'm not kidding. I'm not kidding. School board meetings. Say, "So do you have these sort of devices in -- next to your -- next to your bed at home? How many? Oh, you're teaching my kids, I thought it was fair game to ask you if you do this."

Make them live by the rules they're creating for the rest of us, because right now these things are beautiful theories to them. But it's ethereal. Confront them with what it would be like to actually live this way. Randi Weingarten, the president of the American Federation of Teaches and a maybe of the AFL-CIO was on Fox News with Martha MacCallum on Monday. And she discussed kids returning to skrools, as Rush would have said, and the ongoing debate over critical race theory or say it another way, Randi Weingarten wants teachers to stay home unless they're teaching kids to be racist. MacCallum's question: Do you believe that 1619 is a factual program? 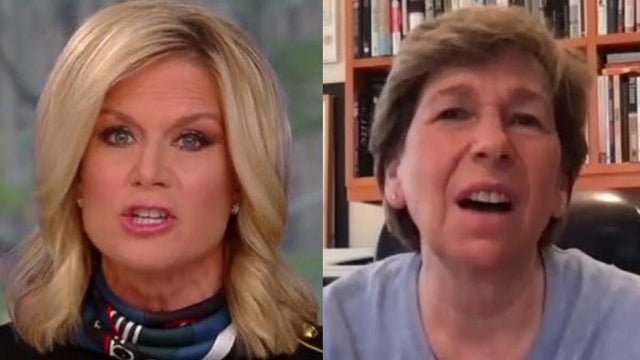 WEINGARTEN: So Martha, I believe that -- I'm a history teacher, and I'm a social studies teacher. And I believe we should teach history. And from everything I can see and understand from the data I see, 1619 was the year that the first slave boat came from Africa to the United States. So that's a point in history where I think we should be teaching.

MACCALLUM: I mean that's very simplistic, you know, take on it. I mean, the 1619 Project that that's the true beginning and the founding of our nation, not 1776, and that the reason for the revolution and the colonialization was that people want to preserve, colonists wanted to preserve slavery, that the country was founded on the basis of wanting to preserve slavery. But that's not factual. That is not true.

In fact, scholars in this area say there's no evidence that colonists were motivated by that in coming to the United States. So it would be wrong as a historian to want to teach them something that is not true because that's the basis that sets up all these other tenets that lead to teaching kids that we have in a systematically racist country.

TODD: And one of the questions to ask these teachers who are being forced or some of just decide whether it's easier just to go along and get along to teach kids to be racist, here's a quick question. We gonna pretend that Native Americans didn't take slaves? Because you know what amongst many things they were super skilled warriors and believed that when you conquered a people you could own slaves. Are we gonna -- are we not allowed to discuss that? Or that black people took black people as slaves and that slavery still exists in the country?

We need to get comfortable being uncomfortable asking questions about that. You know, Rush sliced straight to the center of the rot in American education from the simple things like the actual name of the Fourth of July to the more important like American exceptionalism. And kids and young adults are increasingly taught everything about the truth.

RUSH: We have repeatedly said, ladies and gentlemen, that these protests and riots are being led by college-aged kids who literally know nothing about American history. They have not been taught the truth. This is key to understand. They have not been taught the truth of George Washington, Thomas Jefferson, the founding, and then made up their minds that they think these guys are reprobates and creeps.

But the fact of the matter is -- and this is very important -- they haven't been taught the truth. They've not made up their minds independently of anything. They have been propagandized, and they have been indoctrinated. They've been taught to hate America. And it has to be pushed back against. It can't be tolerated.

Trump's not tearing down statues. Trump is not defacing relics. Trump is not trying to damage or erase our history. He's trying to restore it and maintain it. That's divisive? How in the world does Black Lives Matter escape the characterization of divisive? How do any of these left-wing protest groups escape that they are the ones who are divisive?

It's obvious some of our schools and universities have become some of the most anti-American places on earth. Indoctrination centers for anti-American propaganda. Campus Reform, great website, they went out and spoke with young American students ahead of the Fourth of July to see what they knew about the holiday.

And even though most of the students that Campus Reform interviewed said that America was a racist country, most of them couldn't answer even the simplest questions about Independence Day. They didn't have any idea. Fourth of July, had no idea what it was. College people. College educated people. Students were asked, for example, what the holiday commemorates. They were asked which year the country declared independence. They were asked which nation the United States declared independence from and which was fought for American independence, what war.

Many could not answer any of these questions. Some answered that America gained its independence in the twentieth century. Others said the corresponding war was the Civil War, World War I, World War II. They had no concept of - (interruption) How do you get into college and not know it? Because the SATs have been corrupted, because the entrance exams have been corrupted to coordinate with what people have been taught in high school.

It's a concerted effort. Do you know the name Howard Zinn? Howard Zinn is the author of the textbook used all across America. The guy's a Marxist. He hates America. He always has. How it became the number one textbook, I'll never know. Well, the answer is obvious. The leftists are everywhere.

Our education system is lost. We have totally, totally lost it. And during these two generations of loss, we've had American parents striving, sacrificing to come up with 40 grand, 50 grand, 30 grand a year to send their kids off to be propagandized. And they've done it with pride. They've done it with great pride, that they've been able to get their kids into these colleges.

And now we've got teachers -- I read teachers in northern Virginia -- i.e., Washington suburbs -- are demanding hazard pay for the coming school year. Teachers who have been doing nothing since March want hazard pay. They want special pay. People stocking shelves in grocery stores and trucking and delivering supplies all over the country, they haven't made such demands.

Teachers, hazard pay? Because, what? The virus? Where's your commitment, teachers? You people have been -- look. I know there's exceptions, don't misunderstand. But how many times have you heard a caller to this program, a teacher, a conservative in either a high school or a college, and they whisper, and they tell us they're using a fake name 'cause they don't want to be identified.

There's always a renegade conservative professor somewhere at some university, some college, some high school. We hear from 'em. I wish I had a dollar for every time I have addressed the issue of our declining education. Because we have seen, folks -- as I say, there's two ways to look at this. You can look at it as the abject failure of the education system or you could look at how they've triumphed. They have demonstrated what you can do if you control the education system.

TODD: And they've opened for Republicans, if they'll take it, the biggest arguments ever for vouchers, for public -- nonpublic schools, for private schools. You can productize freedom and free kids from indoctrination, GOP. You got the guts?