RUSH: Grab audio sound bite number 3. We had a call on this program last Friday that apparently just took a lot of this country by storm. This caller was in the last hour -- wait a minute. There were two -- the first hour. This is the first hour caller. There was another one in the third hour that was along the same lines. The first hour caller literally broke down in tears. He was distressed beyond his ability to express it. And that call has been tweeted, reproduced. 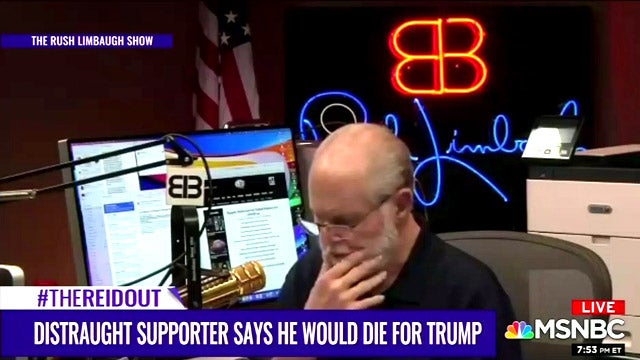 I mean, I woke up Saturday morning and logged on the computer. I had people out the wazoo telling me that that call had taken the country by storm. And I figured that had to be the case because that caller is being smeared now by MSNBC as a member of a cult. So this past weekend and this morning we have a montage of Steven Hassan, former FBI assistant director Frank Figliuzzi, Chris Hayes, Joy Reid, Joe Scarborough, all on MSNBC talking about the caller. His name is William in Ashburn, Virginia. It happened on Friday.

HASSAN: The right-wing authoritarian cults that are part of the cult of Trump is what's driving the mess that we're in right now.

FIGLIUZZI: If you apply kind of a cult-like assessment to this, the cult continues because the leader continues in an amplified way.

HAYES: I feel a profound sense of empathy for that man. Really, really smart people, sophisticated people, end up in cults.

REID: Another Trump voter broke down, declaring his fealty to Trump in a teary call to Rush Limbaugh. They will die for him.

SCARBOROUGH: People calling in to Rush Limbaugh, saying they're ready to die for Donald Trump. Really? Is this Jonestown? 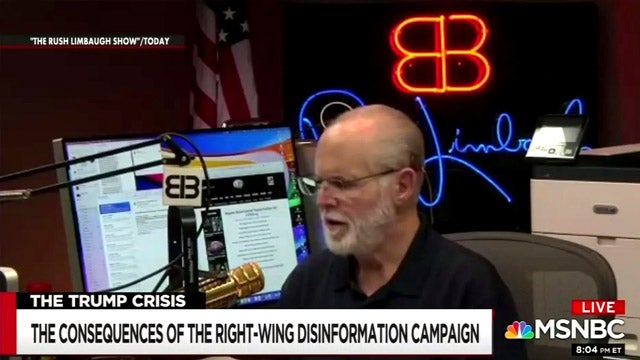 RUSH: This, again, it shows the left in this country literally has made no effort to understand the 73 million of you who voted for Trump. They have no desire to understand you. All they want to do really is ignore you and hope you'll go away. They really just want to find a way to dispatch you. They want to find way to make you not even here, make you irrelevant.

They're the people that you can trust your feelings to because they will never disabuse you. Yet here they are laughing at this poor guy and making fun of him. I remember the call. The guy did break down in tears over how distraught he was over a combination of things. He didn't believe the election outcome and was a little afraid nothing was gonna be able to be done about it.