RUSH: By the way, the audience just keeps expanding, now up to 43 million listeners the EIB Network, estimated according to our latest model run. They're our models and we run them, 43 million people tuning in at this moment.

RUSH: "Did you just say...?" I just got a text. "Did you just say something about 43 million listeners?" (laughing) I said, "Yes! Our latest model projections show 43 million people." Look, all 43 million don't listen at one time. That's over a three-hour stretch. The average time spent listening to this program is like two hours and 28 minutes. 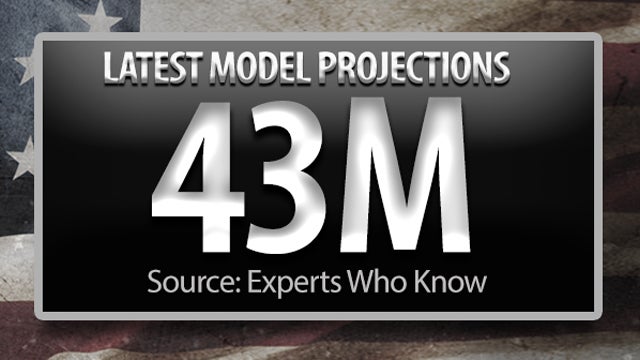 You don't know, folks, 'cause you don't know radio survey models, but that is phenomenal. The average time spent listening is like two hours and 25 minutes. I mean, nobody comes close. But the latest model runs that we have (you know, we run 'em ourselves) shows 43 million. That's up from 42.5 million last week.

(interruption) Well, no! (laughing) The question is, "Would you...?" (laughing) "Would the number go down if people started going back to work?" No. There's no flattening of the curve here of the EIB audience. It doesn't happen. We've been here for 31 years, and that has not ever happened. There hasn't been a flattening the curve like that.

See, your question... When this program started -- when it was early days, 1988 -- some of the initial objection was, "Well, Rush, who's listening? The only people listening from noon to three are people on welfare. Everybody else is working." I said, "No, no, no. We're gonna revolutionize it. You wait and see," and we turned radio prime time into noon to three.

See, your question is, "When people go back to work, will they stop listening?" No. They will listen at work as they have been doing for 30 years. (big sigh)