RUSH: We're gonna go to Los Angeles. This is Tim. You're up first today with us. And it's great to have you, sir. Hello.

CALLER: Yes. Rush, Schiff accidentally out Ciaramella as the whistleblower yesterday. His staff left it in the William Taylor transcript, and it's posted all over the mainstream media. Schiff posted it on the House website, realized that he screwed up yesterday, and pulled it down last night. But it's still all over NBC, CNN -- 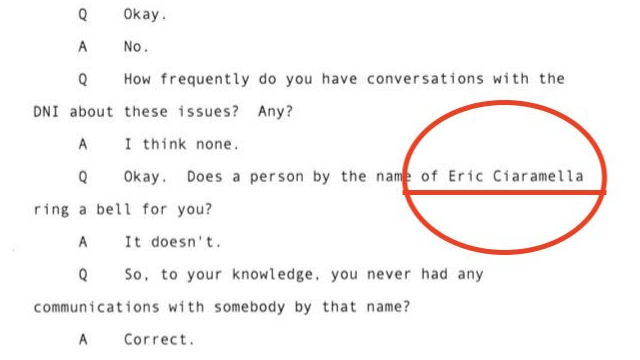 RUSH: Wait. Wait. Now, I knew this. I knew that Schiff's staff failed to redact Ciaramella's name in one of the transcripts they released with the testimony of Bill Taylor. I had not heard they pulled it down. Last I heard was they hadn't changed it, it was still up there. He pulled it down last night?

CALLER: He pulled it down off the House website last night. I'm not sure exactly what time. But it's still up on all the mainstream media websites, the PDF, during Mark Meadows' questioning. It's still there. They all outed it. Nobody should be hiding this name anymore. They all outed him, every single one of them.

RUSH: Now, when I first heard about this, and this is hours old, this is earlier this morning when I was smack-dab in the middle of show prep. The last I heard on this until your call was that the staff had outed the name and had not redacted it and still it was there. So people were speculating maybe he's not the whistleblower if Schiff didn't pull the name down. But you're saying he's pulled it down?

CALLER: Last night when this first broke, yes, they absolutely 100 percent pulled it off the House website.

RUSH: All right. So what is your take? What's your interpretation of this?

CALLER: They screwed up, like, they are so arrogant, rushed to put the transcript out there, and they just flat-out made a mistake. If they didn't make a mistake, why pull the transcript off the House website?

RUSH: It's a sign. I hate to keep bringing it back to things I said 'cause I really don't like making the program about me, but, folks, there's a pattern here. When the Democrats have the cloak of secrecy, when nobody but them knows what's going on, like the Mueller report, there weren't any leaks from the Mueller report. So everybody was allowed to build up expectations. "Mueller's got the goods. Trump's gone. He's gonna prove that Trump colluded and Trump stole the election."

Of course, the report comes out, and it was dead, it was a dud. So then they immediately moved over to obstruction. And they couldn't get anything on that. So then they brought Mueller out in public. They just couldn't accept that Mueller found nothing. When it turned public, it was a disaster.

Mueller was a doddering old man who didn't know what was in his own report. Because he didn't write it. A guy named Andrew Weissmann and the rest of the staff wrote it. Mueller was a figurehead from the get-go to give it credibility and an unassailable reputation and all of that.

But the point is when they went public, it was a disaster. And that's the trend. Now, Schiff is getting ready to go public now, and all of this is starting to implode. So what Schiff's doing? Well, they got the whistleblower's name out -- uh-oh. And now we are learning that Schiff is not even gonna use the whistleblower, not even gonna use Vindman because quid pro quo may not have any teeth. So now they're gonna go to bribery. It's an exact replay of what happened with the Mueller investigation and report. And their problem is they don't have anything.

They are lying. They are manufacturing an ongoing illusion. And they add to the illusion at every step or phase of this with a new allegation. Like the phone call just happens to fall into their lap, oh, we're gonna impeach someone with a phone call. That's because collusion with Russia bombed out. This is gonna implode on them. It is starting to. May even be ahead of the game on that. Tim, thanks for the call.

RUSH: Here is the transcript that Schiff released that identified the name of the whistleblower. Actually, Schiff didn't do it. It came in the form of a question from one of the Republicans, and I don't know who the Republican was. I think the witness here is Bill Taylor, but I'm not even sure of that. But this has since been taken down. "Question: Okay. Does a person by the name of Eric Ciaramella ring a bell for you? Answer: It doesn't. Question: So to your knowledge, you never had any communications with somebody by that name? Answer: Correct."

I think it was Taylor, and I think it's Mark Meadows asking, but I'm not sure. Anyway, Schiff didn't release it or ask it. It was a Republican questioning Taylor, and that was part of the transcript. His name, Eric Ciaramella, was released by Schiff. Now this is no longer there. It's been pulled down.

CALLER: Hi. What an honor to speak to you.

RUSH: Great to have you here with us.

RUSH: You mean is the whistleblower gonna get in trouble for doing anything the way he's done it?

RUSH: This is a Democrat-media run operation. The whistleblower was told things that he did not hear -- by Vindman, we think, but we're not sure about that, either. The whistleblower then called Adam Schiff. Right there's the violation. The whistleblower, if he's really blowing a whistle, has to go to the inspector general. She didn't do that. He went to Schiff. Schiff then examined -- and Schiff knew this was coming. It's all a setup. Every bit of this is a setup, and now that that's been learned... Remember, the key to this, Jane, is that Trump released the transcript.

RUSH: That is what blew this up. This was gonna be something entirely different if Trump had not released transcript. They were gonna be able to say that it was whatever it was, characterize it however they wanted to characterize it. They wanted to be able to say that Trump was obstructing; he was covering up. He releases the transcript. That made the whistleblower irrelevant because the whistleblower never heard the call. All he had was secondhand knowledge.

The transcript of the phone call is the transcript of the phone call. It's everything in it. It doesn't matter what anybody says about it, and all anybody was saying about it was their opinion. So now it's gone. So your question is, "Will the whistleblower ever be held accountable for participating in an obvious political scam?" I don't know. But all I can tell you is, how many Democrats get in trouble for doing stuff like this? Nobody's gotten in trouble yet for the entire Russian collusion hoax, and we hope that happens at some point down the line.