RUSH: Here is Grace in Dallas, Texas. Great to have you on the program. Hi.

CALLER: Hi, Rush. Thank you for taking my call. After Neil Armstrong passed away in 2012, you gave the most beautiful tribute to this great American hero. You explained in great detail the risks these astronauts were taking. And one fact you talked about has stuck with me all these years. On Saturday to celebrate the 50th anniversary of the lunar landing, my family had NASA TV on all day. And your teachings on the lunar landing were more comprehensive and descriptive than 12 hours of NASA TV and many visits to both the Johnson and Kennedy Space Centers. 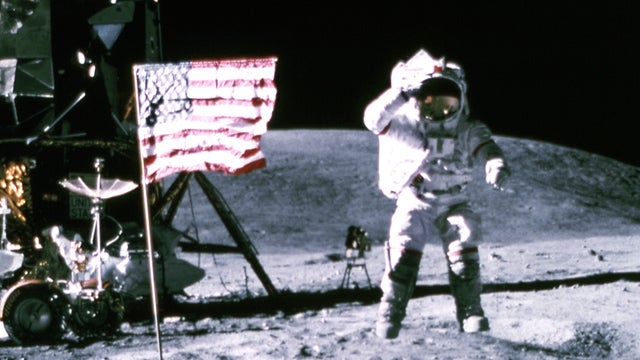 RUSH: You are kidding me.

RUSH: I didn't see any of that this weekend. Now, are you sure about that?

RUSH: Twelve hours of official NASA and what you learned from me about Armstrong and the landing was more detailed than that?

CALLER: Yes, sir. You informed me about the significance of the risk that these men took with each and every step on the Moon because the "men of science" at the time did not know how deep the dust layer of the Moon would be. And that is why Neil Armstrong's first report when he was on the lunar platform was about the depth of the dust, he was reporting it seems to be two inches deep. And they knew one of the risks they were taking, they could land on the Moon and then sink into oblivion because of the dust layer being so thick. You taught me that. So thank you, Rush, for your beautiful tribute to Neil Armstrong and for your thoroughness in explaining the great risks these American heroes took.

RUSH: Well, I thank you so much.

CALLER: And in closing, I wanted to let you know that I am a Millennial, I am 33 years old with a daughter who has a name that is one of your top 10 favorite female names.

CALLER: Kathryn. And I was brought to tears with excitement and hope because of Trump and Pence reviving NASA. This is exactly what this nation needs. Space exploration serves to unite us as a nation under the common goals of adventure and curiosity and to take the focus off of our individual selves just like it did in --

RUSH: That is so exactly right. But look. Look at what the left is doing, Grace. They are corrupting the space program. They are politicizing this great human and American achievement by claiming that it furthered racism, gender inequality, and overall inequality because it was only white people that were involved. It's the most despicable thing.

CALLER: Well, they are starting the new program called Artemis -- and I don't know if you saw the announcement of this -- and their goal is to put the first woman on the Moon. And I'm excited for my daughter to have this amazing opportunity to see the new Artemis program unfold and for the opportunities. She is educated, she has been listening to your program since birth. And she jams to your tunes, and she says, "Rush-bah" every time your program comes on.

CALLER: And I just wanted to thank you so much for your service and for teaching at the Institute for Advanced Scientific Studies.

CALLER: You are doing a great job.

RUSH: Thank you very much. I really appreciate it. You know, I'm gonna say something that is going to be misinterpreted or misunderstood. But I'm gonna say it anyway. I don't expect most people to believe it. But calls like this just flatter me like you can't believe, make my day, because I don't get – see, even just mentioning -- I don't want this to sound defensive or sad. I don't want to sound like whining or complaining 'cause you all know I don't do that.

I don't get much feedback. This is not a complaint, largely 'cause I don't position myself in places to get it. And I don't seek it. So when I get a call like this -- I mean, you realize she thinks that she learned more from me about the Moon landing and the risks and the challenge than watching 12 hours of NASA over the weekend.

And I remember the Armstrong tribute, and I remember everything I said about the risks that today are largely taken for granted. But putting yourself on such a tiny, little room, capsule on top of the -- at the time, the most powerful rocket -- just the objective, despite all of the testing, the things that had to work.

For example, they're on the Moon. And I'll get to the dust business here in a minute. If they're on the Moon, lunar lander is on the Moon, they've done their moon walks, they've collected their rocks. Now it's time to lift off from the Moon. They've got one chance. If the engine doesn't fire, they die there. It's because of the technology at the time. It's because of the fuel source and the way it was ignited, they've got one chance.

If they miss it, if the engine doesn't fire, they don't get off the Moon. If it's a second or two late, they're gonna play hell 'cause they don't have any fuel. There's fuel to reposition the spacecraft, but not to propel it. Plus you're in the zero gravity environment. There's no thrust really against it. So they’re using the gravity of the Moon to get there.

They were not using rocket power to get to the Moon. The rocket power was to escape earth's gravity enough to be affected by Moon gravity so that the Moon brought the spacecraft to it. There was no gigantic rocket on the back of that Apollo capsule launching them. It was just little positioning jets to change the yaw and the pitch, but not the speed.

Well, that engine was a rudimentary engine. They designed it to be as simple as possible because it had to work. They test fired that engine over a thousand times in the testing on earth to monitor it, to make sure it would work. And at that moment in time -- they're doing a countdown -- time to lift off the Moon, it had to work.

Well, obviously it did. It worked perfectly. But it was just that kind of endeavor. There was no backup for this. I don't remember why, if the engine didn't fire, it couldn't be fired again. They would have had to wait, if they missed that split second they would have had to wait for another one to come around, what with the Apollo orbiting and the Moon rotating on its axis. But it was just a simple switch that was thrown, the computer did it, and if it missed…

Now, the dust business, the reason why this stuck with me is because growing up as a little boy, little boys like rockets, we’re interested in rockets and so forth. And, in fact, Millennial boys still are. That's why they're fascinated going to the Mars; they haven't had to grow up yet. They're still able to act like they're 8 or 9 years old, but now they're on the rockets with Branson or whoever else going to Mars.

In the early days, you know, we would send spacecraft to the Moon and land it to see what happened, but we couldn't send anything heavy enough up there to actually test the lunar lander. And on top of it, the rover and everything else that they need once they get there.

And there was -- if you go back – I don’t know how easy this would be to find, but at the time through the 1960s you can find mainstream stories that would say greatest, latest science is that the Moon is all dust and that anything touching it gets swallowed up, like quicksand, essentially. And they landed, not knowing if that was true or not.

We went to the Moon not knowing what was going to happen to that lander when it landed. We had a better-than-average idea that we were gonna be okay because they had launched probes and other things and they were able with high-powered telescopes to see obstacles that the Russians had put up there that they had not sunk, but nothing this heavy.

And there was a genuine fear that the Moon would literally swallow enough of that lander that it wouldn't be able to get back off and that the astronauts wouldn't be able to get out without being swallowed themselves. That's how little was scientifically, factually known. Now, at the same time those stories were out there in the sixties, there were counter-stories, "This is a bunch of garbage. This is paranoia. The Moon is solid as a rock because that's all its. It's a giant rock. Nothing's gonna get soaked up. Nothing's gonna get sunk in."

But the prevailing view of the day was, “We don't know. We're not sure.” And they arrived not knowing. I mean, the first missions to the Moon orbited but didn't land. There were all kinds of tests done the best they could at the time to get an idea of the surface. But she's right. When Armstrong put his first foot on the Moon, one of the first things he described was the depth of the sand, whether or not they were gonna sink.

Now, they were pretty confident because the thing landed but didn't sink. But at the time, there was not, as we say, ontological certitude about any of this. I mean, you stop and think -- I don't know if these 12 hours explained how all this happened. The lack of power, the lack of thrust to make these rendezvous work. That's why all the testing with Mercury and Gemini, the two astronaut capsules, the docking with the space station. 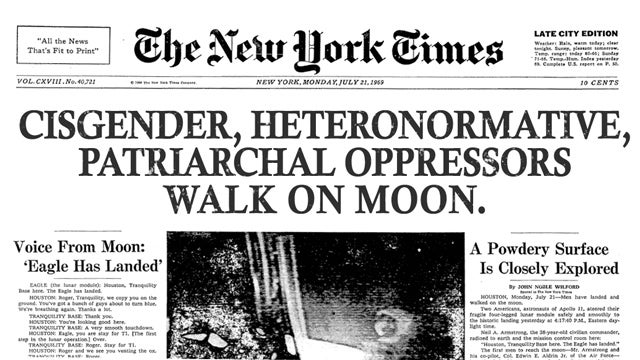 Docking was crucial to having all of this work and being able to use the gravitational force of the Moon to actually suck the spacecraft to it 'cause once they finished with the rocket, there wasn't enough power beyond escaping the earth's orbit, well, the earth's gravitational pull. It’s just fascinating stuff and they had to be able to figure all of this out without ever having done it before.

They were great minds working on this stuff. And she's right. At the time this was going on there wasn't any thought about social justice or any of this. Everybody was just dazzled by it. They were blown away by the possibility, by the achievement, by the accomplishment. It wasn't a braggadocious kind of pride. It was just an acknowledgment that this was a great thing. And now here we come and the American left today has corrupted it.

RUSH: We have a guy on hold that I'm not gonna have a chance to get to today, but I want to get him. We're calling him to see if he can make time for us tomorrow. He's in San Mateo, and he worked for NASA during the 1990s, and he talked to the engineer that built the engine that launched the lunar module back off the surface of the Moon back up to the Apollo capsule orbiting the Moon.

That's the engine we talked about that they had one chance; if it failed, they were doomed. And he talked to the guy that designed that engine, the engineer. There was no ignition for various reasons that our caller is gonna explain tomorrow. It was a cryogenic fluid that was used under pressure. There was no ignition. All kinds of things had to be adapted to because of the atmosphere. So, I hope he'll find time to let us call him back tomorrow.