RUSH: So let me repeat the news that we posted at Fox News this morning. I was on with Steve Doocy, Ainsley Earhardt, and Pete Hegseth on Fox & Friends. Folks, this has been an incredible 11 days. I want to go back and retrace the steps by which all of this happened. 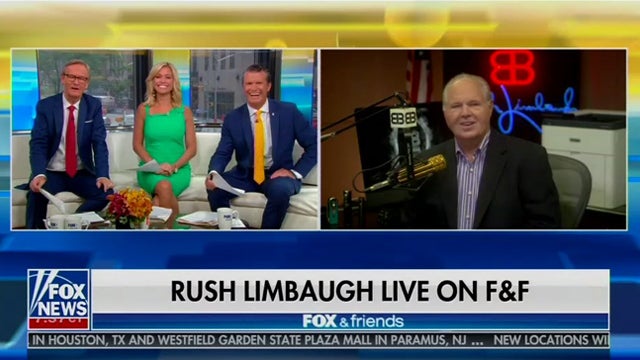 We go back to the day, Fourth of July, around the Fourth of July, when Colin Kaepernick objected to the new Betsy Ross tennis shoes that Nike was gonna sell. And then Nike immediately cancels them. Now, I think immediately that there's some kind of a PR hoax going on here, PR stunt. I'm not sure how many of those shoes they actually made, and this allowed Kaepernick to earn what Nike is paying him by appearing to be relevant.

So he complains and whines and moans because Betsy Ross represents the slave and racist founding of America and the flag offended Colin Kaepernick. And so Nike, oh, we can't have anything offending Kaepernick. So they proudly announced they are canceling the shoe!

Well, that makes me mad. I'm sorry, but people dumping all over founding symbols, the founding of this country, irritates me, and particularly if they're doing it for personal or financial gain, which Nike and Kaepernick were doing. So we have the RushLimbaugh.com store. We've revitalized it, we've modernized it, and we've restocked it and I got hold of my wife, Kathryn, and I said, "How quickly could we do a turnaround on a shirt bouncing off of this?"

That was the Fourth of July late in the day. By Monday, by the following Monday we were able to announce the Stand Up for Betsy Ross T-shirt, and here it is again. I'm holding it up so that you can see it. The Stand Up for Betsy Ross T-shirt. We were able to announce these shirts were in the process of being produced and in stock and available for sale in the EIB Store. That was July the 8th. I mean, we had grand designs, grand hopes. We had no idea what was gonna happen.

But the orders started coming in like crazy. And I was asking questions like, “What in the world did Betsy Ross ever do to anybody?” Betsy Ross was an early feminist. She was one heck of a woman. She was the designer of the first American flag with the 13 colonies represented as a circle of 13 stars. Anyway, the orders started coming in, and we had to immediately reorder and then reorder and then reorder.

And they do great work.

For example, one of things they do is build smart homes for wounded warriors with many of the day-to-day features of the home -- the refrigerator, the stove -- automated so that the doors open automatically, the stove raises and lowers, the light switches go on by looking at them. It's really, really a great thing for people who have been injured by IED explosions. And there's now a video at RushLimbaugh.com showing one of these smart homes and at the store as well and one of the wounded warrior recipients.

It's really, really great work. So we wanted to make sure that everybody knew that there was a charitable tie-in, that proceeds from the sale of the Stand Up for Betsy Ross T-shirt would go to the Tunnel to Towers Foundation. Well, the orders kept coming in so fast and we started struggling with, “Do we announce this or not? Is this gonna end?” The energy is still behind it.

So we decided that today would be the day -- we're 11 days into this and we have hit milestones at every stage. To give you an example, every year the Super Bowl champion, there's a T-shirt produced, and the team that wins the Super Bowl's given the T-shirt, they put it on over their jerseys after they've won the game. Those shirts generally sell about 50,000 each, and it takes them three months to do so.

In 11 days, because of you and the audience at Fox News -- you people continue to do extraordinary things -- in just 11 days, we have zoomed past 100,000 T-shirts, and there were 14,000 new orders so far today. The amount of money that we have cleared after expenses and so forth that we are able to donate to Tunnel to Towers is $1.5 million. 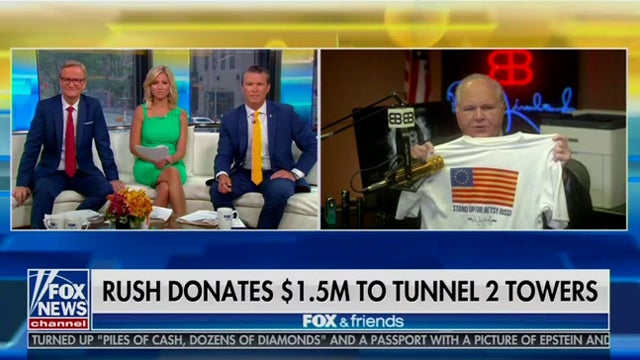 And people are sending us photos of themselves wearing the shirt, engaging in activity with the shirt. It's a vehicle for pushback. A lot of people are frustrated over what is happening. They're frustrated of the country constantly being ripped to shreds, criticized as unjust and immoral, it's offensive, and people have taken advantage of this opportunity as a way to push back, in addition to getting a quality shirt.

Now, we've made the cotton manufacturers a little mad because there isn't any cotton in this T-shirt, but it is unique, really cool fabric that's unlike any T-shirt that you have ever worn unless you have previously purchased a T-shirt from the EIB Store. The point is, we're not finished. We're not gonna be pitching this each and every day and wearing it out in front of you. But I just want you to know that so many people are paying -- this a $27 item. A $27 item generates one and a half million dollars to a great charity in 11 days and going, and counting.

So I wanted to make sure that you knew the numbers. We've been struggling with how to do this for a host of reasons and finally decided, well, here it is. This is where we are, this is where we're headed, and the energy behind this continues. People are continuing to shop at RushLimbaugh.com, find the "Store" tab there. And I have to tell you we are gonna be working fulfillment here for quite a while.

I don't know if you ever planned, if you ever thought about what it's like to actually fulfill. Our packaging is state-of-the-art. We're not just throwing these things in a cheap paper bag and having somebody write your name on it, throw a stamp on it or two, and throw it out to the mailbox. You will not believe the packaging. You will not believe the care and the love and the devotion to excellence that goes into the packaging.

In addition, I pack some of them. And when I pack one, I sign a photo that says packed by me, badge number 1, EIB Network. And I enclose my little picture that I've signed in some of them. I mean, nowhere near a hundred thousand of them and it's purely random. But we're all involved in fulfilling these things. It is a massive task. We've even prepared videos of the process of accepting delivery when the semi-trucks show up and the UPS truck shows up. 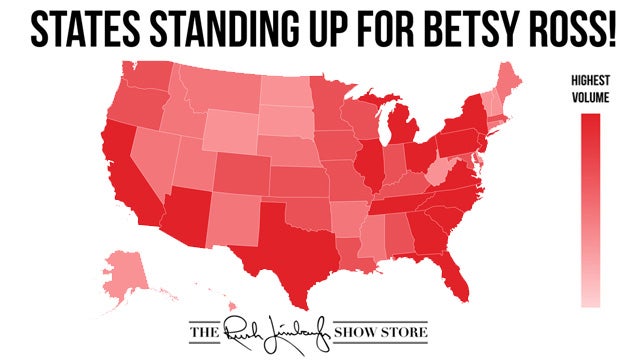 We've put together videos showing the fulfillment process taking place in our massive warehouse in a secret location not far from here. It's been wonderful. It has been absolutely phenomenal because once again it's been a total testament and another realization of just how great and wonderful you people are in this audience, how much you love your country, how much you're willing to express that, and at the same time devote a portion of proceeds to just a tremendous charitable organization, the Tunnel to Towers group.

They're great people doing great things as well. So thank you. And be advised, it's ongoing. There's no reason to stop it. There's no reason to call a halt to it because the demand is as intense as ever. I imagine by the end of the day here, we're gonna have had 20,000 more orders come in. Close to 14,000 just off the Fox appearance today. It's been about that every day.

There's just no sign of slowing down. The fulfillment staff's getting a little worn out up there, and we're looking at maybe hiring additional people and telling Bernie Sanders we're gonna pay them more than he's paying his campaign staff.

Have you heard about that scandal? Is this not...? Bernie Sanders' staff is demanding the same benefit package that his campaign is promising every American, and he's refusing! They want a minimum $15-an-hour wage, and they want free health care! The people working on Bernie's campaign are simply asking, "Hey, if this is what you're proposing, how about doing it now?" And Bernie Sanders' campaign is refusing! It's classic!