RUSH: I want to remind you of something that I have said for I don't know how long. I made a big deal of this point when I addressed CPAC all those years ago in my first national address to the nation, televised by all the cable networks, starting at 5 p.m. on a Saturday. I was taking the occasion -- knowing that there was a nationwide audience, I thought it'd be wise -- to define conservatism in a way that could be understood by everybody. And in a way that a lot of people don't understand because of the smearing that conservatives have taken throughout the Drive-By Media. 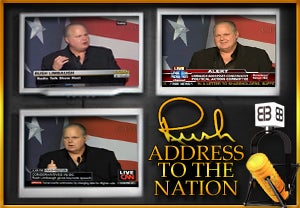 It is this: We love everybody.

We conservatives love everybody.

We wish the best for everybody.

We understand the great opportunity we all have as Americans.

We wish for all to achieve the American dream.

We wish all who want to, to apply themselves to whatever pursuit of happiness or excellence they desire. It's a rare opportunity to be born in America and to have these blessed opportunities. And all that we ask -- all that people expect, all that we expect -- is that you love America, that you recognize how fortunate you are to be in America and that you not run around thinking it's some great punishment to be an American.

I remember the first time, after this program began, the first time that a serious attack in the media by somebody, some Democrat -- I don't remember who -- racism, everybody involved with the show got scared. “Oh, my God. That could kill you. That could wipe us out. This is horrible.” They knew it wasn't true, but nobody knew how to deal with it. And one of the people in the office came to me, “You love everybody, don't you?”

And I said, "Yeah," it jogged the thought, "Yeah, I do. I love everybody. I love everybody in the country." I want the best for everybody, and especially now that I have experienced the kind of success I've had, I certainly am not exclusive about it. My attitude is if I can, a lot of people other people can, because of where we live, because of the freedom that we all have to be who we are to do the things that we love.

And this is not nationalism, and it's not braggadocio. It's simple realization of the blessed nature those of us born in this country have, the opportunity that we have, the lifestyle that we are born into, the opportunity to improve, however we define that. For 90% of the world's population, these are just dreams that never have a chance to be realized, because they don't live in places where that kind of potential is recognized. It's suppressed.

It's a responsibility with carrying this much freedom and ensuring it and guaranteeing it and fighting for it. There's a responsibility that comes with that. And the desire for everybody to experience it is part of the country being great. It is what “Make America Great Again” means. It's called realizing that we are all Americans and that we all have blessed opportunities that most in the world do not have, have never had, and will not have until they come here.

That's why we have to be very vigilant over who does come here and how they get here. We don't want to open ourselves up to being undermined from within. As good people, we are susceptible to that. As optimists, we tend to see the good before we see the bad. But when we see the bad, we have to recognize it and react to it and deal with it for the sake of the country.

We want everybody to achieve the American dream. And we expect that everybody will have this kind of attitude. We don't want to have sit around here and accommodate a bunch of people that think being born here is akin to slavery for the rest of your life, that you are a grievanced victim or some such thing. It's offensive. It's offensive to us and all who have come before us who have fought, given their lives to maintain this blessed place.

And in return, we bend over backwards to help people pursue their dreams because it's part of America being great and staying great. That derives from a great population, great people. No matter what their economic circumstance, no matter their ethnicity or their religion, great people make a great country. And that's all Trump is talking about. That's it. If I had to define Trumpism and Make America Great Again in five minutes, that would be it.

There's so much shortsightedness here over manners and personality differences and speaking tendencies and so forth that it misses the entire point. Way too many people, I think, take for granted that this country's always gonna be here and it's gonna be able to withstand whatever potshots are taken at it. And a lot of us don't think that. A lot of us are not lazy enough to think, "Hey, we don't have to stop this. Hey, we don't have to worry about this. These people are gonna bomb out."

People have been saying this for as long as I've been alive. I've been trying for 50 years, 30 or whatever it is, to warn people that we were headed to right here at this point. And now we're here. We don't have to warn people, “Hey, you better shape up or guess what it’s gonna be like in 20 to 30 years?” Because the 20 to 30 years has happened and we're in the middle of it now. And there's a simple retort to it. They want to run around and talk about how we're racists and bigots. No. We love everybody, including them.

We want the best country we can have. We have a model, we have a model that's been in existence over 200 years that without parallel and without question is the best country human beings have ever devised. There's not one that's even close. We've got the model. They don't have to theorize. They don't have to toll people if you do this and do that and do that then this is gonna happen because it's already happened. We're living it. And we're living it while there is an increasing attitude of destruction all around us that has now taken over one of our major political parties.

So it isn't hard to say you love the country, and it's not a cliche to say so. It shouldn't be embarrassing to say so. And it shouldn't be in any way problematic to explain why and what you want. And, by the way, it's not defensive to talk this way.

I just think there's been such a distraction from what conservatism is at its base and what we believe as conservatives that these simple, basic elements of it that I've just described have long been abandoned and just assumed that everybody understands that. And they don't anymore because of the successful rebranding of conservatism by our enemies over the course of many decades. It’s time to reclaim it and that's what Donald Trump is doing.

CNN ran this focus group. I've got the audio coming up. They went and found eight Republican women in Dallas. They begged 'em, they cajoled 'em, they tried to get 'em to rip Trump to shreds over these tweets, and they would not. And the CNN people could not believe it! The interviewer conducting the focus group couldn't believe it and then the group on the panel after the interview ran, they couldn't believe.