RUSH: Boy, I'll bet you've been waiting for this hour, folks, to find out what's going on, what to think of things, and how to feel about it, and your patience is about to be rewarded. Great to have you with us as always. It's a brand-new week of broadcast excellence hosted by me, Rush Limbaugh, a household name in all four corners of the world. It's a delight to have you here. Our telephone number, 800-282-2882. The e-mail address, ElRushbo@eibnet.us.

“Why did Trump do it?" There's a bunch of theories going around that -- well, theories, opinion going around about how badly Trump stepped in it here. One theory holds that the Democrats have this internecine war going, and that they're self-destructing and you've got these young Squad members taking shots at Pelosi and that the Democrat Party is disunified and unraveling and then Trump comes along and unifies them.

“Why did Trump have to do it? For crying out loud, when your enemy is self-destructing the thing to do is to stand aside, get out of the way and let it happen.” How many of you think that was the case? The reason I ask is, it's true that the Democratic Party has got a circular firing squad going on, but I don't know how many people really know it. I know wonkville knows it. I know all of the blogosphere and the media and all of them know it, but the Democrat Party media is not highlighting just how bad it is. I'm gonna do that for you today. I'm gonna tell you how bad it is. They are not reporting how bad it is.

My point is, I don't know how many people, the general population, really know how bad the Democrat Party circular firing squad is, you know, being led by Alexandria Ocasio-Cortez aimed at Pelosi, that she's got her squad members joining fire with her.

There's another train of thought or school of thought that says, "Trump, why did you do it, for crying out loud? You just ignited the media. The media's turned on you." So if you are of that point of view, how many of you are really mad at the media and not Trump? Well, wrong way to put it. How many of you are upset because what Trump did seems to be lacking in understanding of how the media would react and are turning around and making him a target?

The reason I ask this -- I'm gonna refresh your memory with a – (interruption) Well, now, hang on. Look, I'm not through presenting options and my staff's already blowing up. Just hang on a minute. I can't do it all in the first five minutes. Remember that famous dinner party I had back during the John McCain, Sarah Palin days? And these two people showed up that were friends of people that had been invited. They themselves had not been invited, but the people asked if they could bring a couple friends and I said it's not a good idea but I relented 'cause I'm a nice guy. And I am naive tending toward optimist.

They show up. And these two guys promptly started telling me how we had to throw Palin overboard. “She's worthless, she's destroying us, we gotta get rid of her.”

I said, “So you basically want to turn over candidate selection, issue selection, to the media? You want to be able to determine whether you're gonna support something based on how badly or how little the media criticizes?”

So in the same vein, how many of you, you're really mad at Trump but you're not mad at the substance, you're mad because Trump enabled the media, and you're sick and tired of the media doing what they're doing and you wish Trump would stop feeding them this stuff? You don't really disagree with the substance of what he said. In fact, you may really agree with him. You're just saying, “Why the hell did you have to say it,” right? 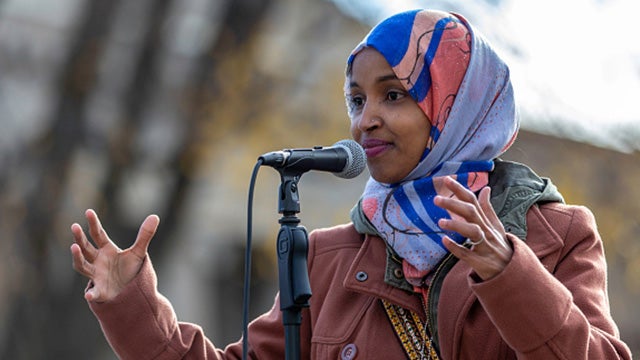 He told 'em to come back after they fixed the countries of their national origin. Only one was not born in America, of the four that Trump was targeting, three of them were born here. But it is obvious these women do not like this country. And if you don't understand that, just stand by, because I'm going to share with you some of the things these babes are saying and have been saying. (interruption) What, are you telling me not to defend Trump? I'm not defending Trump. We're in the midst of another fake news cycle here! All I'm gonna try to do is bring a little truth to it! It's all fake news. And it's really rooted in the fact, when they can't deal with a Trump truth bomb, they go hysterically nuts.

The Never Trumpers on our side fall right in line. And it's almost a replay, not quite exact, but it's pretty close to when Trump came down the escalator at Trump Tower to announce his candidacy in June of 2015. Remember the reaction to that when he said we got too many rapists and purse snatchers and muggers and murderers coming in from Mexico? "You can't say that."

I want to share with you the two Trump tweets. "So interesting to see progressive Democrat congresswomen who originally came from countries whose governments are a complete and total catastrophe, the worst, most corrupt, inept anywhere in the world, if they even have a functioning government at all, now loudly and viciously telling the people of the United States, the greatest and most powerful nation on earth, how our government's to be run. Why don't they go back and help fix the totally broken and crime infested places from which they came, then come back and show us how it's done. These places need your help badly. You can't leave fast enough. I'm sure that Nancy Pelosi would be very happy to quickly work out free travel arrangements."

So, in addition to confronting them on the substance of things -- and if you're not aware, just hang on, because these women in question all hate Israel, number one. You want to talk about xenophobia and anti- this. These people are anti-Semites in ways that define the term. It goes without saying these people don't like America. What have the last two to three weeks been all about?

RUSH: Now let me go to the second Trump tweet when he found out everybody was aghast and appalled, he doubled down. Next tweet: "When will the Radical Left Congresswomen apologize to our Country, the people of Israel and even to the Office of the President, for the foul language they have used, and the terrible things they have said." Trump said, "So many people are angry at them & their horrible & disgusting actions!"

: "In his initial attack on Sunday, Trump said congresswomen he did not name came from corrupt, poorly managed countries to which they should return," and it's like clockwork. Everybody reacts to this predictably and identically. No matter where you tune, no matter what publication you log into and read, "Trump's a racist, Trump's a sexist, Trump's a misogynist, Trump's a bigot, Trump's a homophobe, Trump's a xenophobe, you name it," with nobody even taking the time... This is such a knee-jerk reaction.

Nobody's even taking the time to... Even if they're gonna blow it to smithereens later, even if they're gonna react to it, nobody's even taking the time to seriously examine it or analyze it. There's just the knee-jerk reaction, and then that happens, and then Trump supporters start beating their heads against the wall. "Why did he have to do it! For crying out loud (unintelligible griping), this is so frustrating," because what you're tired of is the media ripping Trump, and you think that someday that's gonna end.

And I'm here to tell you, it isn't going to end.

One way you could look at this is Trump being consistent and not changing. There's all kinds of people out there on our side saying, "Oh, my God. Trump did the worst thing he could do! He has unified the Democrats!" Folks, the Democrats are already unified against Trump. I don't care about this circular firing squad they've got going on. They're unified against Trump. When it comes to the 2020 election, there isn't gonna be any circular fire squad. Now, there will be up until then, and who knows how much damage they're gonna do to each other on the Democrat side in the interim.

But they're always gonna be unified against Trump.

There's nothing that's gonna bust up that unity.

People are living in fantasyland if you think that something can be done, that Trump could adopt a demeanor or behavior that might have some Democrats actually turn up to support him in 2020. Come on, folks. That's simply not gonna happen. Let me take a brief time-out here as we're off and running on the EIB Network. We have coming up today sound bites to support all of this. I'm gonna go through the detail here of the internecine battle going on in the Democrat Party between Alexandria Ocasio-Cortez and her Squad and the rest of the party leadership, 'cause I don't think people really have been told by the Drive-By Media the extent of this.

RUSH: At the very least, you know what you can say is that Donald Trump is helping define the Democrat Party, and in that sense, what Trump is doing here... Whether this is an intended consequence or not, the fact is that Trump is pushing the Democrats and the Drive-Bys into staunchly defending the most radical haters this country has at the moment. These people -- and it's not just these four women in the Squad. It's the entire Democrat Party. Trump is forcing them to come out and defend. Make no mistake about the fact the American people are fully aware of what's going on on the Democrat side regarding their anti-Americanism.