RUSH: Let me get a sound bite with Rudy. I just want to give you an example of Fredo Cuomo, he and Don Lemon, in their royal cluelessness. But this is an object lesson in the abject ignorance of media people today. Grab sound bite number four. This is Rudy, CNN Newsday today with Fredo Cuomo. This is a conversation where Fredo asked Rudy about Robert Mueller's Russia investigation and whether or not Trump should do the interview with Mueller.

And in a previous the sound bite, Rudy has said, "Frankly, we'd just soon not do this. But if this is what it takes to end this, then maybe we'll sit down and do it." And he expresses his reservations for not doing the interview. And Fredo is beside himself and says (paraphrasing), "Why not just do it? What do you have to be afraid of? If you guys have the truth on your side, what's the problem?" 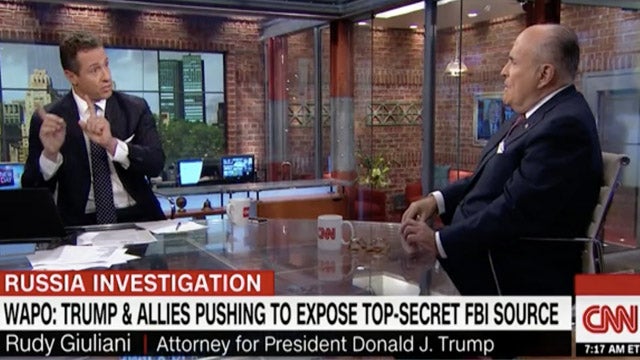 GUILIANI: Explain to me why they even need an interview with the president, if it isn't to try to trap him into perjury, which is what the judge in the Manafort case has said about that. They basically are trapping people into perjury.

CUOMO: It's only a perjury trap if the president won't tell the truth.

CUOMO: And you should have more faith in those men and women --

CUOMO: -- especially when you've said they're the best people you've ever worked with.

RUSH: All right. Stop the tape. We've already heard enough to help me make the point. Now, this went by real fast so let me review the transcript with you. Rudy says, "Explain to me why they even need an interview of the president." Look, the president can't be indicted. Right? This is the accepted regulations, Justice Department, 1973, the president cannot be indicted because he runs the executive branch. He cannot be made to answer to subordinates.

Impeachment is how you get rid of a lawless president, not via the criminal justice system. That's been established. So Mueller has a grand jury. Why? Trump can't be forced to testify to grand jury. What's the point of this? And Rudy is pointing this out to Fredo. He says, "Explain to me why they even need an interview of the president if it isn't to try to trap him into perjury."

And Fredo says, "Hold on. Hold on. Hold on. Perjury trap only if the president won't tell the truth." And Rudy doesn't believe what he's hearing. "Oh, come on, good God, Chris. Don't you have any --" And Cuomo said, "You should have more faith in --" Here's the point. I don't think Fredo really does know what a perjury trap is. I think Fredo is like a bunch of middle tier establishment members in the media who think they know everything but know nothing.

They assign and grant total authority to law enforcement and Democrat Party officials, and they never question them. They accept blindly what those people say and who they are. And a perjury trap in Fredo's world, that's something conservatives have come up with to try to convince people that the guilty didn't do it. But they wouldn't try to trap the per -- Fredo believes when Mueller and others, "We wouldn't dare try to trap the president." Fredo believes that.

He has no understanding of the guile and of the deceit of the people he respects. So a perjury trap to Fredo is just something Rudy's making up to hide the fact that Trump won't tell the truth. I have to take a break, but I'm in the middle of a point here. I'll finish it when we get back.

RUSH: Welcome back. El Rushbo and half my brain tied behind my back just to make it fair.

Everybody knows what a perjury trap is. Interview somebody, you ask 'em a question that requires intimate detail as the answer. You go back to 'em for the next interview, you ask them the same question, and if they miss the timing by 10 minutes, you have lied to the FBI. You have just committed a felony. Not about anything substantive.

You might have said the meeting was at 6:15 the first interview, the next interview you say it's 6:30, you have lied to the FBI. And they ask you all kinds of questions with such detailed answers. And that's how they hope to entrap people. This one, I still can't believe they're talking about doing this. And Rudy is out there saying, "Well, we've narrowed the scope down here." I think, from what I'm gathering, Rudy and his team actually believe that if they sit for this interview with this very limited scope, that this can be over by Labor Day.

And, I'm sorry. I don't see this ending until the people behind it think they've given their best shot at influencing the November elections. Folks, the only way I can see this thing ending is in the really far out, really hard to believe instance that Mueller really has nothing and wants to wrap this up as best he can and save as much face as he can. That possibility being real just doesn't move my meter, so to speak.