RUSH: I have a tweet here from a woman named Erica Werner. The name probably doesn't ring a bell. Erica Werner is a reporter. That means she's a journalist. That means she's objective, right? She works at the Washington Post and she is the Washington Post congressional reporter, and here is her tweet from 8:34 this morning: "A Benghazi bomb-thrower will be SecState and a torture overseer will be CIA director -- IF CONFIRMED BY THE SENATE." (sic) She used to work at the AP; now she's at Washington Post. That's a reporter. That's a reporter tweet.

How about Jill Abramson? Jill Abramson was the executive editor of the New York Times for a long time. Now she's writing, she's thrown out of there, quit, whatever. Big buds with Jane Mayer of The New Yorker. Now she's writing at The Guardian. Did she what she said? She's been so distressed since Trump won that sometimes she has to pull her Obama doll out of her purse to remind her that it wasn't that long ago that this was a great country.

Jill Abramson, executive editor of the New York Times, writing at The Guardian, said she gets so depressed and so out of sorts, she can't believe what's happening to America that she carries around with her in her purse a little Obama doll, not a bobblehead, an actual Obama doll. You can buy these things at the Obama shop, I guess. I don't know. I've seen 'em. She's got one.

She brings it out of her purse. She looks at it to remind her it wasn't that long ago that progressives were running America and we had the first African-American president to remind her that it could happen again. Well, now, not that it would come as any big surprise, but, I mean, obviously here's Jill Abramson who's the executive editor at the New York Times -- and, remember, they hype themselves as, "We're journalists. We are not activists." 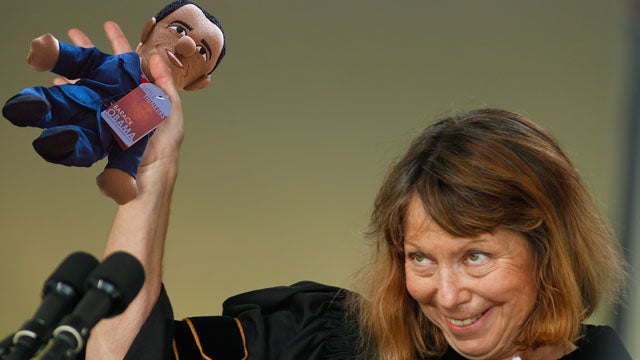 BS. She just confirmed that while running the New York Times she was actually just nothing more than a very high-powered, highly placed Democrat Party operative disguised as an editor at the New York Times. Carrying around an Obama doll? And besides what it means in terms of her biases and so forth. What does it say? A grown woman admitting proudly that in her moments of deepest depression and stress, she opens her purse to pull out an Obama doll, which means that it's in there all the time.